“Bercum Builders was honoured to be recognized for this project.” says Darren Witt, Owner of Bercum Builders and current President of the Canadian Home Builders Association – Central Okanagan. “A tremendous amount of hard work and determination from all our, trades and suppliers enabled a successful completion. We’d like to especially thank our clients who entrusted the renovation of their home with the Bercum team.” 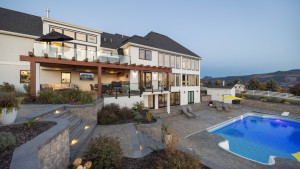 49 Awards, in six focus areas were presented in front of a sold-out audience of nearly 700 at the Hyatt Regency in Vancouver. The winners and finalists represent the spectacular homes and projects completed by the Canadian Homebuilders’ Association of British Columbia (CHBA BC) members across the province that were built, renovated, developed, created and marketed from January 1, 2020 – September 30, 2021.

“Our deepest gratitude goes to the many trades and suppliers who understood the vision for this home, and then contributed their best work in very trying times – and to Todd and Keri-lee Sloan for believing, and trusting.” Says Grant Petkau of Kelbrook Construction.

“As the housing market continues to be a favourite topic of conversation across the province, from the water cooler to the dinner table to the backyard BBQ, the Georgie Awards are a special night for our members and guests to celebrate their projects from the past year,” says CHBA BC President, Cassidy deVeer. “The well-deserved winners and finalists represent the best single-family homes, multi-family developments, interior design and outdoor spaces in the B.C. residential construction industry.”

“We planned for this year’s gala cautiously, as government restrictions on in-person events evolved over the past months. I’m pleased to say that we had a sold-out crowd, and our staff delivered a spectacular event which inspired and awed our guests and delivered well-deserved accolades to our members.” says CHBA BC CEO, Neil Moody.

Representing over 300 members, the CHBA-CO advocates on behalf of and provides education and community-building opportunities for builders, renovators, interior designers, and the suppliers and trade companies they employ. Locally, CHBA-CO members create over 16,000 local jobs, contributing over one billion dollars to our local economy. One in five employees in British Columbia work in the home building industry. Recently, CHBA-CO launched The Buidlers’ Pilsner in collaboration with Copper Brewing to support affordable housing through Habitat for Humanity Okanagan. For more information visit www.chbaco.com