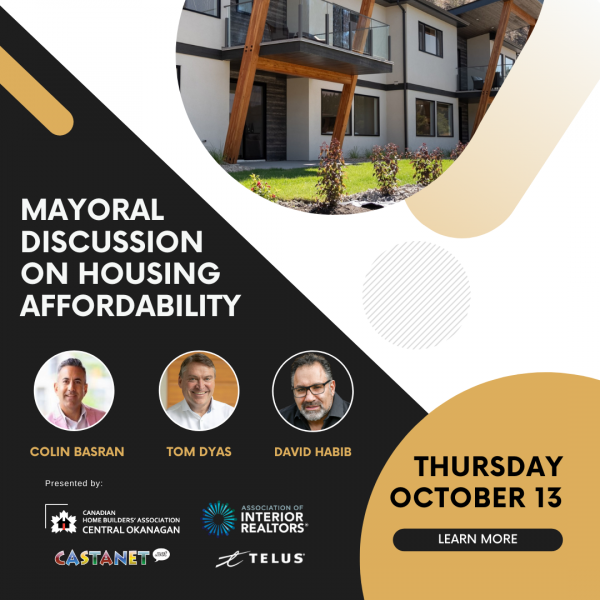 September 22, 2022 – Kelowna, B.C. – With housing affordability on the top of everyone’s mind in the Okanagan, the Canadian Home Builders’ Association – Central Okanagan (CHBA-CO) are launching an education and awareness campaign on the topic of housing affordability across the region, and how elected officials can have an impact. The site features issues the impact housing costs at the local level, and share survey answers from candidates from across the Central Okanagan.

The goal of the campaign is to ensure residents are aware of how local politicians can impact the cost of housing in their region when they head to the polls on October 15, 2022. Thus far, over 40 candidates have responded in Kelowna, West Kelowna, Lake Country, and Vernon. Currently, the average benchmark price for a single-family home is over $1.1 million dollars.

“Over 70% of British Columbians want to see more action from their municipality on issues around housing affordability” says Daniel Winer, Executive Officer for CHBA-CO. We are the fastest growing region in Canada, and we are not approving enough housing to keep up with demand.”

In addition to their ‘Okanagan Votes’ landing page, the CHBA-CO is also hosting a mayoral discussion on housing affordability on October 13 in partnership with the Association of Interior Realtors.

“These elections are particularly important” says Darren Witt, CHBA-CO President. “Local politicians not only tax new housing tens of thousands of dollars before a shovel hits the ground, but also set growth boundaries that have a direct impact on land prices. The ripple effect is massive. Our trades talent can no longer afford to live here, which will make housing even more expensive for everyone, and it will take more time to build a home.”

“The CHBA-CO urges all Okanagan residents to do their research, get engaged, and vote for candidates that support progressive housing policies in their communities.” says Winer. “If we don’t use our right to vote, housing will grow further out of reach for the average citizen.”

To learn more about the issues around housing affordability in the Okanagan, and to learn about potential candidates, visit https://www.chbaco.com/central-okanagan-votes-2022/

To learn more about the mayoral discussion on housing affordability, visit https://www.chbaco.com/chba_events/kelowna-mayoral-discussion-on-housing-affordability/

CHBA-CO is the voice of the residential construction industry in the Central Okanagan. Representing over 300 members, the CHBA-CO advocates on behalf of and provides education and community-building opportunities for builders, renovators, interior designers, and the suppliers and trade companies they employ. Locally, CHBA-CO members create over 16,000 local jobs, contributing almost two billion dollars to our local economy. Recently, CHBA-CO launched The Buidlers’ Pilsner in collaboration with Copper Brewing to support affordable housing through Habitat for Humanity Okanagan. For more information visit www.chbaco.com