I’m Not Going To Buy Now 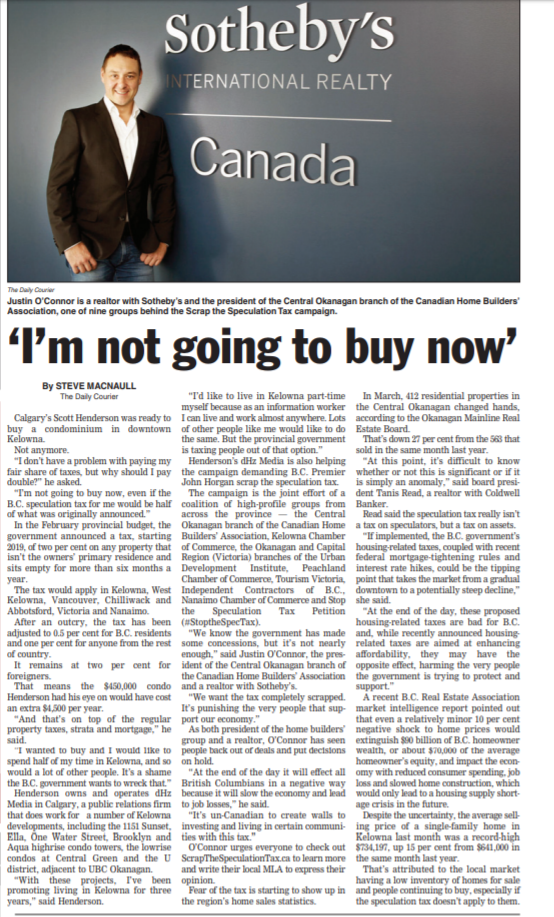 “I’m not going to buy now”
Calgary’s Scott Henderson was ready to buy a condominium in downtown Kelowna.

“I don’t have a problem with paying my fair share of taxes, but why should I pay double?” he asked.

“I’m not going to buy now, even if the B.C. speculation tax for me would be half of what was originally announced.”

In the February provincial budget, the government announced a tax, starting 2019, of two per cent on any property that isn’t the owners’ primary residence and sits empty for more than six months a year.

The tax would apply in Kelowna, West Kelowna, Vancouver, Chilliwack and Abbotsford, Victoria and Nanaimo.

After an outcry, the tax has been adjusted to 0.5 per cent for B.C. residents and one per cent for anyone from the rest of country.

It remains at two per cent for foreigners.

“And that’s on top of the regular property taxes, strata and mortgage,” he said.

“I wanted to buy and I would like to spend half of my time in Kelowna, and so would a lot of other people. It’s a shame the B.C. government wants to wreck that.”

Henderson owns and operates dHz Media in Calgary, a public relations firm that does work for a number of Kelowna developments, including the 1151 Sunset, Ella, One Water Street, Brooklyn and Aqua highrise condo towers, the lowrise condos at Central Green and the U district, adjacent to UBC Okanagan.

“With these projects, I’ve been promoting living in Kelowna for three years,” said Henderson.

“I’d like to live in Kelowna part-time myself because as an information worker I can live and work almost anywhere. Lots of other people like me would like to do the same. But the provincial government is taxing people out of that option.”

To get involved and sign the petition, visit ScrapTheSpeculationTax.ca