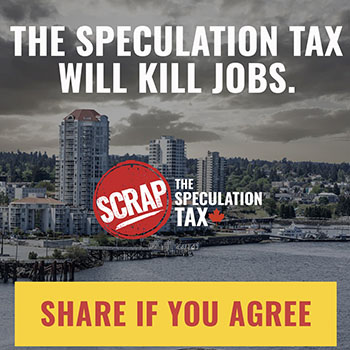 BRITISH COLUMBIA – Today, a coalition of concerned British Columbians launched a campaign called Scrap the Speculation Tax to demand that Premier John Horgan and the government reverse their decision to implement a Speculation Tax on B.C. and Canadian taxpayers.

While the government wants to address housing affordability, this patchwork tax will do the exact opposite. It will kill jobs, hurt the B.C. tourism industry and make the housing affordability issue worse. This tax is not going after the real speculators, it only targets hardworking British Columbian and Canadian tax payers.

“It is our responsibility to speak up and educate consumers about how the new speculation tax will negatively affect jobs in our community”, said Justin O’Connor, President of the Canadian Home Builders’ Association Central Okanagan.

The coalition recommends the B.C. government immediately scrap the Speculation Tax and do the following to address housing affordability:

• Target real speculators, not long-term homeowners, including many out-of-province residents;
• Protect our local tourism dependant economies, like Kelowna and the South Island;
• Reduce the cost of delivering housing units by exempting vacant development land from this tax;
• Exempt Canadian and British Columbian taxpayers from this unfair tax measures.

The campaign wants to spread the word about the unfair and ineffective Speculation Tax. Their website, http://scrapthespeculationtax.ca/ allows concerned citizens to learn more and write to their local Member of the Legislative Assembly (MLA) to express their frustration and concerns.